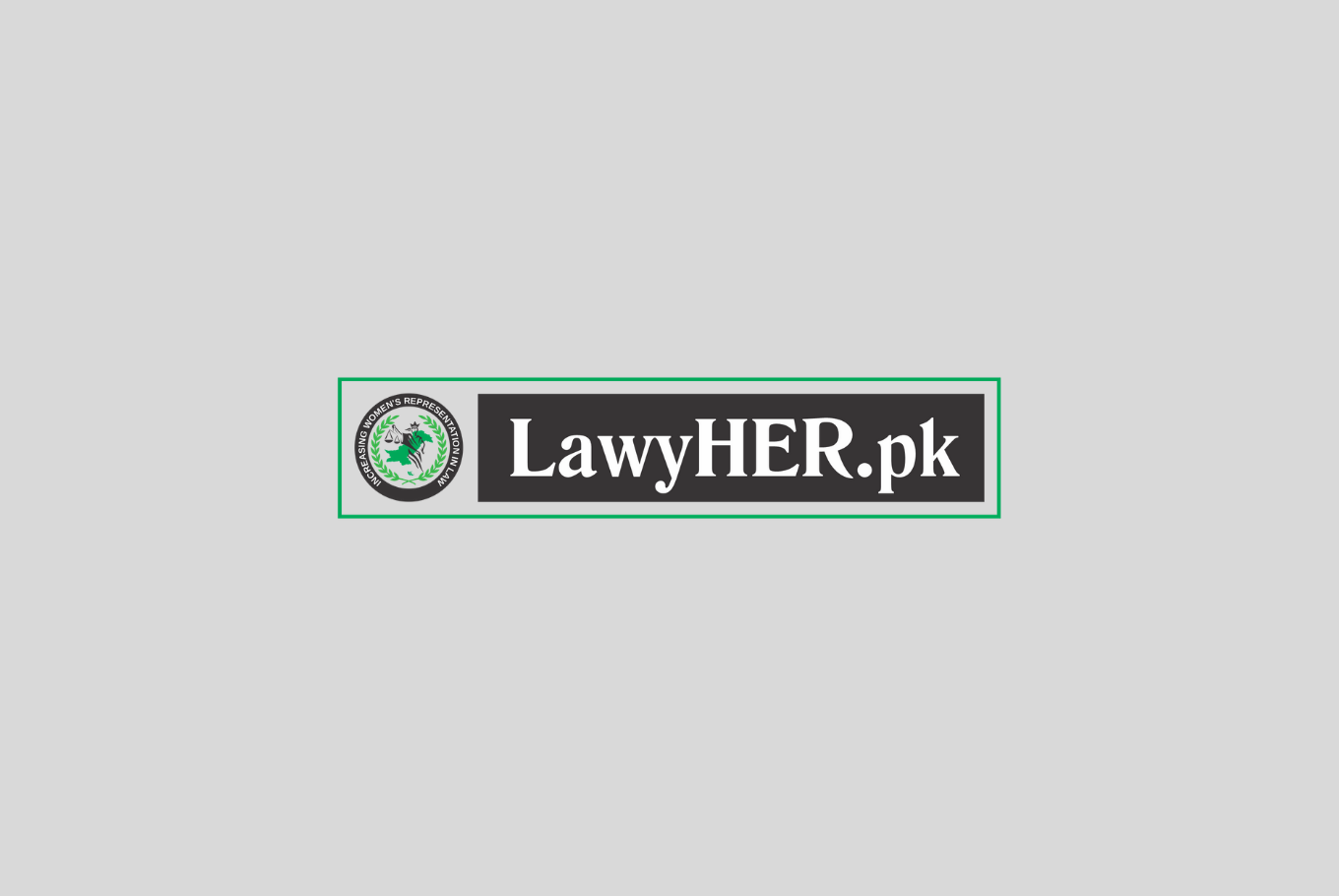 Every time I speak of increased representation of women in law, I am met with some very standard responses. Majority question the integrity, commitment and competence of female lawyers, a few bring up the seniority debate, some quite ignorantly hand down the ratio argument to superficially and quite frankly, lazily accept the current disparity as being justified in terms of number of male and female members licensed to practice law, still yet there are questions on the pipeline of eligible candidates and women’s own apprehensions in coming forward and competing for leadership positions all the while when those with fake degrees have been allowed space to reach highest forums of regulatory bodies in law. In other words, non-lawyers have been placed on pedestals of leadership but there has been nearly no space for duly qualified women in leadership roles within the profession.

The scrutiny around a women’s nomination, their participation in competitive leadership positions or around as much as the conversation about their inclusion and fair representation is marred with an extremely myopic and limited understanding of social and systemic barriers that hold women back in the profession. It is almost always thrown back at women in terms of placing the fault somewhere in their lack of commitment or actions to excel and grow in the profession and exonerates the flagbearers of the professional regulatory regime from any responsibility towards notions of ‘diversity’ and ‘inclusion’. In fact, these terms are so unheard of, that when I first proposed the Gender Equality and Diversity Committee to be constituted in the Lahore High Court Bar Association in 2018, I had to explain what these principles meant for the goodwill of the profession and its advancement to the concerned persons for the committee to be constituted in the first place. Still then, we were looked at with suspicion and as aliens as we stood out from the familiar territories known to them. Our work was new and revolutionary in many ways but the fact that it challenged hardened positions, deepening inequalities, existing power structures, arbitrary procedures and discriminatory practices, was an idea unpalatable in a profession that is dominated by tribalism and blind community support without an iota of accountability or introspection. So hardened is the notion of ‘brotherhood’ in the profession that it is akin to blasphemy to even speak of bringing in accountability or regulation. We have seen this in countless strikes by lawyers that choose to obstruct access to justice to defend one of their own. Ironic that being lawyers, they have had to resort to pressure tactics to get desired results.

In order to gauge how well the profession fares on the diversity and inclusion index, we look at, amongst other things, the numbers and accessibility of women, minorities and other diverse groups such as the differently-abled in leadership and representative positions such as in the bar councils, superior judiciary and tribunals, prosecution department etc. The data however, has been anything but a cause for celebration. Women’s representation in superior judiciary is under 5% in Pakistan. In the 73 years of our illustrious history, we have never had a woman in the Supreme Court. The representation of women in bar councils and in bar associations in even more dismal. In the previous tenure, Punjab Bar Council had at least 2 women amongst its elected members; in this year’s elections held on 28th Nov 2020, this number came down to zero. Likewise, in Sindh, only 1 female candidate emerged successful whereas previously there were 2. That is a major drop in terms of percentage and one that indicates that there can be no fair representation without affirmative actions as put aptly by Rehana Khan Parker, a lawyer based in South Africa, that, “Driving the agenda for the empowerment of women, requires enforced structures to accelerate women. One person one vote will not achieve parity in a male dominated male orientated terrain. That’s what we did. We introduced quotas.”

As reported in Indian Express, the Attorney-General of India, K K Venogopal sketched similar dismal numbers of women in Indian judiciary in his written submissions to the Supreme Court while arguing a plea against a bail condition of Madhya Pradesh High Court which asked a man who is accused in a sexual harassment case to visit the home of the alleged victim and ask her to tie a ‘rakhi’ symbolizing that alleged victim and offender bond in sibling-hood. He stressed, there must be gender-sensitivity trainings for judges & lawyers to ensure that they do not objectify women in sexual violence cases. He believes women's increased representation will go a long way towards a more balanced and empathetic approach in sexual violence cases so much so that he stressed on need for Supreme Court to take lead in ensuring 50% representation of women in leadership positions since the power of appointment rested almost exclusively with the Supreme Court Collegium. He also said that the Supreme Court must direct collection of data to determine the number of women judges in lower judiciary and tribunals and also to determine year-wise number of senior designates by all High Courts. In doing so, he places the responsibility on the institutions and leading bodies responsible for judicial appointments to do their part to ensure 50% representation of women.

In Pakistan, the responsibility to nominate and appoint superior judiciary also rests mainly with the Chief Justices of High Courts. The nominations process is arbitrary and there is no public record of how and who all are/or have been considered for appointments. How many of those candidates have been women or from other marginalized groups such as the minorities or the differently-abled over the years?

According to Venogopal, in India, there are 80 women judges out of a total sanctioned strength of 1,113 judges across High Court and Supreme Court. Of these 80, there are 2 in Supreme Court and 78 are in various High Courts comprising only 7.2% of the total number of judges in superior courts of India. While the numbers are in no way encouraging there too, but they still have at least 2 women in the Supreme Court. In our 73-year long history, none have made it to supreme court, including the likes of Justice (r) Fakhrunnisa Khokhar who herself said, “there has been no woman in the supreme court and those who were to be elevated were sacrificed at the altar of gender bias.”. Justice (r) Nasira Iqbal has also highlighted that, “5 female judges were appointed to the High Court in 1994; two of them had legitimate expectancy to become the Chief Justice of the High Courts of Punjab and KP respectively however, both of them were superseded and were allowed to retire without being elevated to the Supreme Court of Pakistan.”

If in all these years this is the case then the profession and its regulators must look inwards and see what systemic hurdles, underlying biases and other social and procedural anomalies may there be that hold women back from advancing in law instead of only lazily always finding and placing fault with women lawyers and their supposed lack of commitment. Introspective questions must be asked for any real progress to ensue. It must for instance be asked, what steps and measures have been taken by those in control to address the disparity on the bench and bar? It must be asked what their plan to improve the pipeline of diverse candidates is and what they have done or will do to encourage and enable the participation of women and other marginalized groups to join judiciary and other representative positions? Have they worked on any legislative reforms or amendments to rules that enable more women and other marginalized groups to participate on a level playing field? Has any gap analysis or critical reviews of existing legislation and rules been undertaking to identify the procedural and technical provisions that disable meaningful participation of marginalized classes in the profession? For instance, was the impact on potential of women candidates considered when the Legal Practitioner and Bar Councils act 1976 was amended in 2018 that led to increase in the number of years of legal practice of candidates for eligibility to run for provincial bar elections? What about inclusion of young professionals, differently-abled and the minorities in superior and leadership positions? If no such questions have been contemplated by those with power then what business do they or anyone for that matter have in indolently accepting that women need to do more?

There is no longer any scope for ‘tokenism’ when it comes to representation. The female lawyers have called for equal participation of diverse members in the legal profession in all leadership positions. They have demanded safe and inclusive workplaces including safe and accessible courts; have called for an end to discriminatory practices and asked for more information on election processes, candidates and their manifestos; they have asked for accessible voting processes including digital/online/e-voting facility to be able to fully participate in the profession.

It is time that our regulators and concerned bodies accept the ground disparities and structural barriers that have led to a hegemonic playing field and come together to play a leading role in introducing the necessary reforms and data collection for ensuring and enabling a diverse and inclusive legal profession and improve the stature of the profession on the diversity and inclusion index.

The writer is a diversity and inclusion advocate. She tweets at @NidaUsmanCh.

*This article was first published in The News on Dec 12, 2020. It is available at https://www.thenews.com.pk/print/757235-the-legal-profession-an-introspection.